I’m writing a proposal at the moment for a book about my favourite horror film House of 1000 Corpses, so I’ve been doing some film-watching research on the effects of exploitation/splatterpunk/hard-gore horror (I think I just made up a new genre there!!). I wonder if my neighbours can hear the screams, the sound of broken bodies and terrified teens. Obviously I only watch these things when daughter isn’t here, when she’s at her dad’s or, sometimes, when she’s at school. The neighbours don’t necessarily know that, though!

Vi has a interesting relationship with scary films. Those kids films that are much scarier than the ones I watched at 8. Paranorman, Coraline, Monster House, Frankenweenie etc. She is really scared of the dark and always has been, yet takes an anxiety-fuelled delight in ghosts, ghouls, witches, monsters etc. Like me, she loves the horror tropes but can do without the scares. This is what House of 1000 Corpses is like for me. It’s a fun-filled mash-up of monsters, without spilling over into terror territory.

The film takes its cue from the plethora of 1970s American horror so these are the films I’ve been watching. The usual suspects – Texas Chainsaw, The Hills Have Eyes, Last House on the Left etc. But I’ve also strayed into (ex)banned territory, with Cannibal Holocaust being last night’s fodder and I Spit on Your Grave next on my list. Yes, CH was able to provoke a reaction from me. It probably had its intended effect. But actually I was quite impressed. I was expecting a narrative-free shindig around as much gore as possible but I think it had quite a lot to say on the trauma of war, the Cambodia and Vietnam spoils with its torture, rape and murder of civilians by US troops etc. In fact, the most horrific elements were in the animal killings. The slaying of the turtle and monkey are truly awful and I think this lies simply in the fact that the animals were actually killed. One can find a way to emotionally cope with representations of evil, of torture etc, but when you know it’s real it’s almost too much to bear. But the film itself I consider to be a very clever social commentary on the so-called civilised society and it’s torture of those who are different to us. 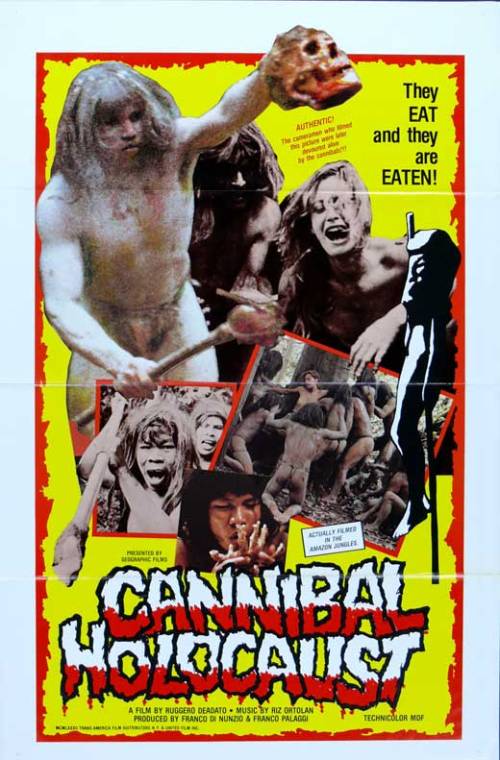 As an aside, I would like to point out that my daughter has absolutely no way of seeing these films, or the DVD cases (most are electronic anyway) and will never have access to my account on-line. Nothing visible in this house is horror-related. All that stuff is stashed away, hidden from view like body parts in the basement freezer.

2 Comments to “Representations of horror”